The club was set up in the autumn of 2000 and the spring of 2001 to enable people of all ages in the area to take part in the sport of rowing. Our objective is to foster enjoyment and talent in sculling and rowing.

Initially with the kind support of local farmer Dolf Dijksterhuis the club started rowing on the fishing lakes and River Nene at Lilford Lodge .

In 2002 the Club achieved Club Mark status marking the efforts of Alan McMurdo and Coach Colin Bullock ability to provide a friendly environment for juniors to learn to row in safety. It was this year that saw Colin Bullock awarded ARA Coach of the Year – Junior Participation and subsequently in 2003 ARA Coach of the Year -Adaptive Rowing. Also in 2002 links were established with Spring Common Special Needs School Huntingdon allowing regular coaching support to be provided for their Go Row Programme.

The club’s first sporting achievement was marked in 2003 with Dan Page winning the Men’s Junior 13 Silver Medal at the British Indoor Rowing Championships, going on to win the Men’s Junior 15 Gold Medal in 2004. This was followed by Sam Wilks winning the clubs first junior pot at the Star Club Small Boat Head Race in 2004 showing the club was not only facilitating the sport of rowing but achieving sporting success as well.

The provision of a ARA Henley Steward Scholarship Coach to the club in 2005 brought additional coaching provision the club which was growing in numbers.

In 2005 the Club name changed to Oundle Town Rowing Club and a racing name established for Prince William School. This was due to the number of adults now participating providing a whole club environment.

In 2006 the club obtained a Sport England Community Club Development Programme grant to build phase one of the clubs boathouse on land leased from The Barnwell Estate. This included a much needed Floating jetty purchased and installed with financial support from local sponsors and Prince William School on land provided by Dolf Dijksterhuis of Lilford Lodge Farm. This major milestone in the clubs history took it away from a trailer and caravan in a field to having a firm future to develop rowing in the area. On 12th Sept 2007 the OTRC Boathouse was officially opened by HRH Duke of Gloucester and Anna-Marie Phelps Deputy Chairman ARA

In 2006 funding sourced for Community Sports Coach this along with Local Network Fund assistance provided a Junior Rowing Outreach programme in East Northants lead by the Community Sports Coach to target young people not normally participating in sporting activities. By 2007 over 290 young people in, Corby, Thrapston, Kings Cliffe and Oundle had been introduced to indoor rowing through the club’s Junior Rowing Outreach Programme. This programme has been developed and now provides a Junior Adaptive Rowing Outreach Programme with indoor taster sessions run in 10 Disabled Youth Clubs throughout Northamptonshire.

In February 2010 HRH Duke of Gloucester kindly agreed to become Club Patron. This has been important to the club as it has been his generosity to allow the Club to establish itself on his estate allowing it to take forward the development of rowing in East Northamptonshire.

In 2010 OTRC won the CCPR’s Sports Club of the Year (SCOTY) Award, with a first place prize of £6,000.  Each year, CCPR awards the prestigious Sports Club of the Year prizes to clubs which demonstrate exemplary commitment to their members, to their local communities and to their sports. The award was presented by HRH Prince Edward on the 4 May 2010 at a Gala Dinner in London.  CCPR is the operating name of the Central Council of Physical Recreation. 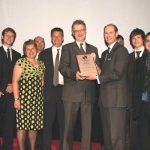 This was a wonderful occasion, organized to celebrate a great milestone in OTRC’s short history.  Around 80 members and their families/friends gathered at the club on the evening of 9th July dressed in all their regatta finery.  After months of planning and several days of physical preparation, the marquee had been erected and decorated, the food and bar were ready and the band tuned up.  As the sun went down over the river and the candles were lit, we all ate, drank and danced the evening away.  The success of the night was a true demonstration of the team spirit /crewmanship present in the club.

2011: The Explore Rowing Project at Oundle Town Rowing Club had its official opening ceremony on Sunday, 11th September, 2011.  Club members of all ages and abilities, benefitting groups and several important dignitaries gathered on the banks of the River Nene to celebrate the continuing success of the project in the Oundle area.

British Rowing’s Deputy Chair, Anne-Marie Phelps, expressed great pleasure at the countrywide expansion of its flagship project.  OTRC Chairman, Alan McMurdo thanked BR and Explore Rowing for their continuing support and also the Henley Stewards Charitable Trust for the provision of coaches over the past years.  Steve Rustage, the Manager, Core Offer for Disabled Children’s Youth Service in Northamptonshire, spoke of the benefits of the Explore Rowing Project to nearly 250 disabled youngsters aged between 12 and 25 in the County.  Others present were Anne Richardson (Explore Rowing), Andrew Johnson (ERRC Vice Chairman) and Kerry (Kes) Stapleton.

2012: On 2nd June, the Explore Rowing section of the club launched a selection of recreational and fine boats for their inaugural trip – a little row to the pub in Wadenhoe and back.  A minor expedition, you might say – if it wasn’t for the two locks in the way!  Nine rowers, a cox and two safety launch men set out in less than glorious weather.  Lots of lessons were learned in preparation for future events and a good time was had by all.